Teens and Sexting- Why Do They Do It?

Teens and Sexting- Why Do They Do It?

It’s no secret that sexting is a common occurrence between teenagers, but a lot of parents are asking the question as to why.  Recently, at least 100 students in Colorado were found to be part of a sexting ring, where they would collect nudes of other teens and have a point system for how many they received.

They were saving these pictures in apps that would pose as calculators or other harmless tools, but would actually be hiding the child pornography. The school and legal system is trying to decide the best way to handle this situation, which may result in felony charges for those involved. 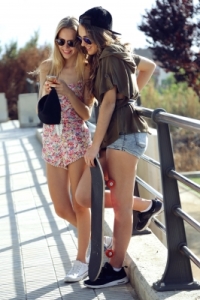 Although many teens participate in sexting, a large majority does not seem to understand the consequences behind it. They don’t understand that what they’re doing is actually considered child pornography and can have severe consequences. So why do they do it?

They don’t know the long-term effects.

As previously stated, they are not thinking of the consequences but living in the here and now. Teens brains do not function the way adults brains do. It’s more about instant gratification rather than weighing out the pros and cons, seeing the bigger picture and then making a decision.

Whether it’s through the opposite sex liking them or because “everyone does it,” teens may feel that sexting is just another form of peer acceptance.

They are pressured to do it.

Often times, a boy (or girl) will use the term “If you love me, you’ll do it.” The other teen will then feel that since they do love them, they have to follow through with this action.

If you have found out that your teen is sexting, or have suspicions that they may be, then seek assistance  as soon as possible. This is a serious issue that could have life time consequences and the sooner it is addressed, the better. Call Life Counseling Solutions at 407-622-1770 to set an appointment with our teen counseling expert.

Life Counseling Solutions (LCS) offers community counseling services. The Services that can be available to those in financially difficult times. Here at LCS. Also, we desire to provide healing and support to all those in need.However, Our Community Counseling Program offers quality counseling service with our Mental Health Counseling Student Intern (with supervision from our expert practitioners) at a reduced fee. Tele-counseling & face-to-face counseling are available options at our office.lifecounselingsolutions.com/orlando-community.../ ... See MoreSee Less
View on Facebook
· Share